Since I can remember I have been a huge fan of Walt Disney Animation especially the feature films.
My favourite film is "Pinocchio" I'm still amazed at the artistry and craftmanship that went into creating that film and to think it was made in 1940. Another favourite is "The Jungle Book" a simple story with great character animation. Of the second golden age of Disney animation I love "The Little Mermaid", "Beauty and the Beast", and most recently "The Princess and the Frog" Disney's return to hand drawn animation.... and long may it continue!
I have been lucky enough to meet three of Walt Disney's original "Nine Old Men" Frank Thomas, Ollie Johnston, and Marc Davis at two different Animation art exhibitions at an Animation Gallery in London, England.
Here is a photo of myself with Frank Thomas. 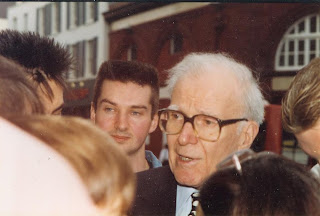 Here is a photo of myself with Marc Davis. 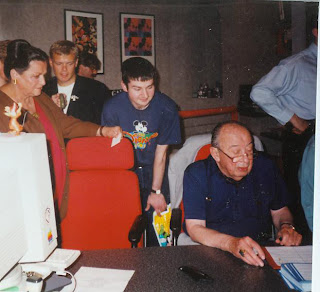 Posted by Robert Brown Animation at 21:28 No comments:

Welcome to my Blog!

Hello and welcome to my Blog which will be a companion to my main animation website.
Here I will be able to post my thoughts, drawings, photo's, videos on all things animated!
I have been working as a professional animator for 25 years now....wow that's a long time!
I became interested in making animated films at the tender age of 13, experimenting with a super 8mm camera, firstly with stop motion plasticine characters and then as my interest in drawing developed I began producing 2D drawn animation and have continued to do so ever since!
Around this time I watched a tv documentary on Richard Williams and his work was so inspiring I decided I had to become an animator! I visited his studio in 1983 when I was 18 and he gave me some wonderful advice DRAW! DRAW! DRAW!
Here is a photo of Richard Williams and myself at one of his masterclass lectures. 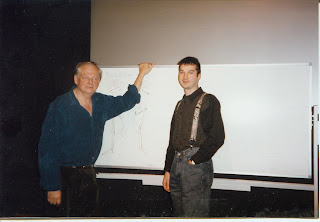 Posted by Robert Brown Animation at 19:55